What Experts Are Saying About the 2023 Housing Market
Learn More

What Experts Are Saying About the 2023 Housing Market

We respect your inbox. We only send interesting and relevant emails.

Real Estate can be emotional...

No Crash in Sight

Housing data illustrates that there is not a housing crash on the horizon despite the current slowdown and home values falling.

Not the Great Recession

With a very limited inventory of available homes coupled with over a decade of tight lending standards, housing values will not nosedive like they did during the Great Recession.

An astonishing 41% of Americans think that the housing market is going to crash in the next 12 months, according to a survey conducted by LendingTree. Even more revealing is that 74% of those who believe there will be a crash think it will be as bad or worse than the “2008 housing market collapse.” With so many convinced that a crash is inevitable, does that mean that housing will once again collapse?

Everyone across the nation recalls watching the housing market take a brutal pounding during the Great Recession. So many homeowners were burned as values toppled and their equity vanished seemingly overnight. It either happened to everybody personally or they knew somebody who felt the severe impact of the downturn. It is understandable that whenever there is an economic slump, the general public immediately recalls the Great Recession and expects the housing market to tumble once again.

Everyone expected a housing crash in 2018 when rates rose from 4% to 5%, but it did not materialize. It did not crash after the initial lockdowns of COVID, yet so many were convinced otherwise. Once again, with mortgage rates rocketing higher, home values already on the decline, and a recession on the horizon, many Americans believe that the housing market is on the edge of a precipice and home values are about to plummet. Even though so many feel a housing crash is eminent, and that it could be worse than the Great Recession, according to all the economic data, current trends, lending standards, and the health and strength of homeowners across the United States, there is no crash in sight, not now, not in the next 6-months, and not in the foreseeable future. 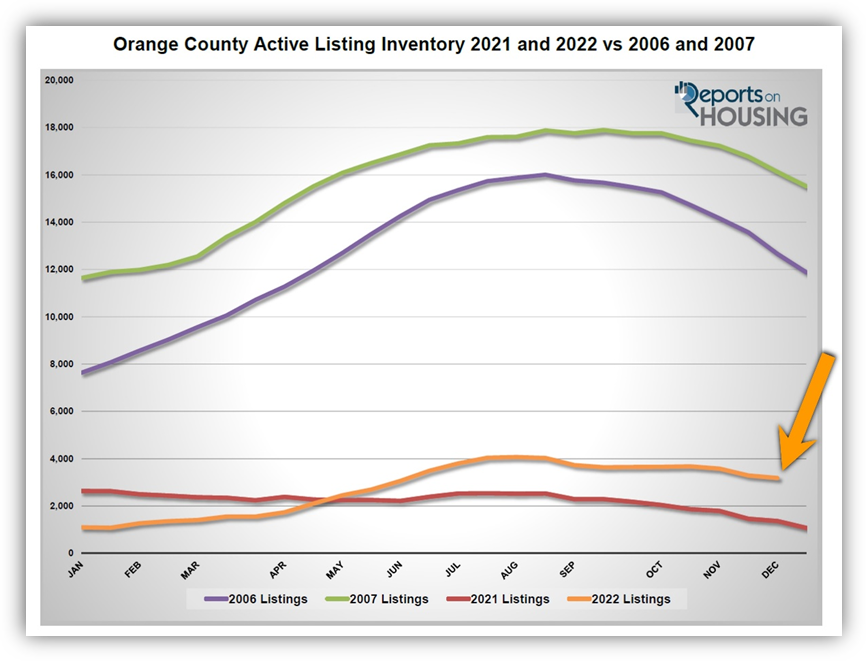 In 2006, when demand sank, the Expected Market Time, the amount of time between hammering in the FOR-SALE sign and opening escrow, which is based upon supply and demand, climbed to over 200 days. And in 2007, when demand dropped even further, the Expected Market Time soared past 400 days. When housing is severely out of balance, values plunge. That’s in sharp contrast to 2021 when the Expected Market Time dropped to 20 days by year’s end. It hit 19 days in March of this year but has climbed to 84 days today as demand dropped to levels last seen during the Great Recession. While 84 days is much longer than the insane pace of earlier this year and all of 2021, it is a far cry from 2006’s over 200 days and 2007’s over 400.

Even though the market time is not that high, values are still dropping today due to mortgage rates doubling from the start of the year. Yet, home values are not tumbling at the accelerated pace of 2007 and 2008 when home values sank by nearly 40%. That will not happen today because of a very limited inventory where homeowners are choosing not to list their homes. So far this year, through November, there have been 8,000 fewer sellers compared to the 3-year average prior to the pandemic, 21% less. There is no panic selling. Housing is not a commodity. Everyone needs a roof over their heads, someplace to call home. There is also an extreme lack of forced selling, homeowners that “have to sell.” During the Great Recession, over 10% of all outstanding mortgages were delinquent. Today’s national delinquency rate is at its lowest level in decades. In Orange County, there are 12 foreclosures and short sales available to purchase today. In mid-December 2019, prior to COVID, there were 54, and in December 2007 there were over 3,700.

Even with sky-high mortgage rates and home values on the decline, housing is insulated from a housing crash. Today’s housing stock is built on an extremely strong foundation with years of tight lending standards due to financing laws enacted after the Great Recession, strong credit scores, large down payments, fixed rate mortgages, plenty of nested equity, and limited cash-out refinances. There is no crash in sight because of the strength of the homeowner coupled with a very limited inventory of available homes to purchase today.

For the first time there are more homes on the market today than in 2020.

The active listing inventory dropped by 104 homes, down 3%, and now sits at 3,182, its lowest level since the start of June. For the first time there are more homes on the market today than two years ago today, December of 2020. The inventory is not dropping as fast as it normally does during the Holiday Market, indicative of the very low levels of demand. Nonetheless, the inventory will still drop considerably to close out the year, less than three weeks away, with very few homes coming on the market and many unsuccessful homeowners who pull their homes off the market only to come on another day. After ushering in 2023, the inventory will start to rise in January and will pick up speed as the housing transitions to the Winter Market, mid-January through mid-March.

The new trend that developed this year is a sharp decrease in the number of homes coming on the market, homeowners “hunkering down” and not willing to move due to sky-high mortgage rates and being locked in at a low fixed rate. For the month of November, there were 1,537 new FOR-SALE signs in Orange County, 718 fewer than the 3-year average prior to COVID (2017 to 2019), 32% less. So far in 2022, there have been 7,999 missing signs, down 21%. These missing signs counter any potential rise in the inventory.

Demand sank by 7% in the past couple of weeks.

Demand, a snapshot of the number of new escrows over the prior month, decreased from 1,212 to 1,133 in the past couple of weeks, shedding 79 pending sales, or down 7%. It was the lowest level since April 2020 during the initial lockdowns of the pandemic. According to Mortgage News Daily, mortgage rates continued to ease on indications from the Federal Reserve that the climb in the Federal Funds Rate will most likely slow and have been hovering around 6.35% since the start of this month. Mortgage rates are expected to improve once inflation is trending down. That can come as soon as this week, with the release of the Consumer Price Index tomorrow. For the rest of the year, with fewer choices and plenty of holiday distractions, expect demand to plunge until ringing in 2023. From there, demand will slowly improve and gain speed upon transitioning to the Winter Market, mid-January through mid-March.

With demand falling faster than supply, the Expected Market Time (the number of days to sell all Orange County listings at the current buying pace) increased from 81 to 84 days in the past couple of weeks. Last year the Expected Market Time was at 21 days, substantially faster than today and home values were screaming higher. The 3-year average prior to COVID was 87 days, similar to today. 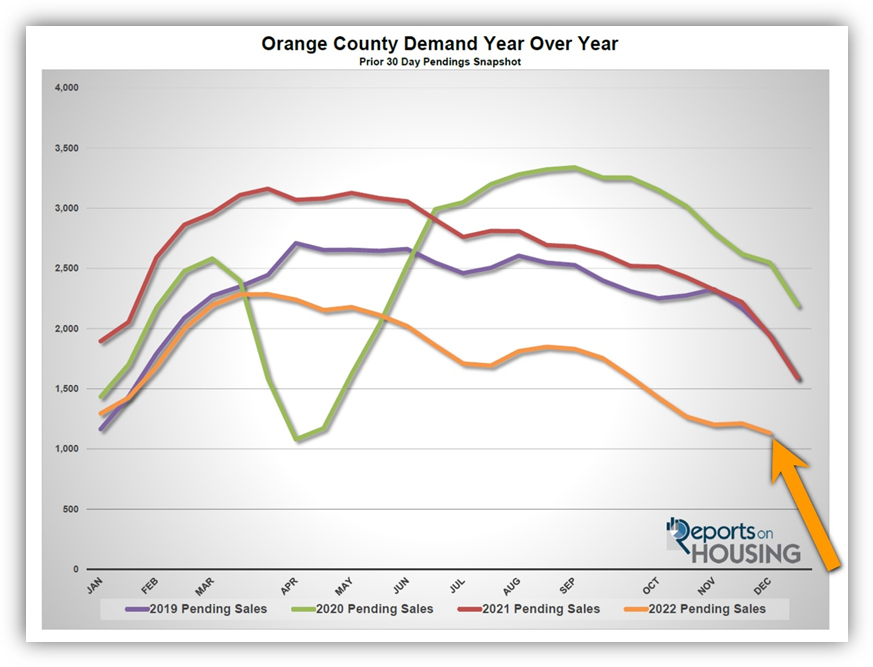 The luxury housing market cooled considerably in the past couple of weeks.

In the past couple of weeks, the luxury inventory of homes priced above $2 million decreased from 730 to 698 homes, down 32 homes, or 4%. Luxury demand decreased by 1 pending sale, down 1%, and now sits at 109, its lowest reading since May 2020, the initial lockdowns of COVID. With supply dropping faster than the drop in demand, the overall Expected Market Time for luxury homes priced above $2 million decreased from 199 to 192 days. Luxury is returning to pre-pandemic levels. Upper end homes typically do not sell instantly; instead, market times of over 6-months is quite common. The higher the price, the longer it takes to sell a home.

Year over year, luxury demand is down by 72 pending sales or 40%, and the active luxury listing inventory is up by 301 homes or 76%. The Expected Market Time last year was 66 days, nearly instantaneous for luxury.

The Housing Market and Your Home

The winter market is still a great time to sell! Buyers are excited about the holidays and looking for their forever homes. Your home could be exactly what someone is wishing for this holiday season.

Want to know if this market makes sense for you? Reach out and let's discuss your best options!

Get Your Home's Value

We respect your inbox. We only send interesting and relevant emails.

We use cookies to enhance your browsing experience and deliver our services. By continuing to visit this site, you agree to our use of cookies. More info